Elements Of Perspective: The Art Of Elliott Zuckerman 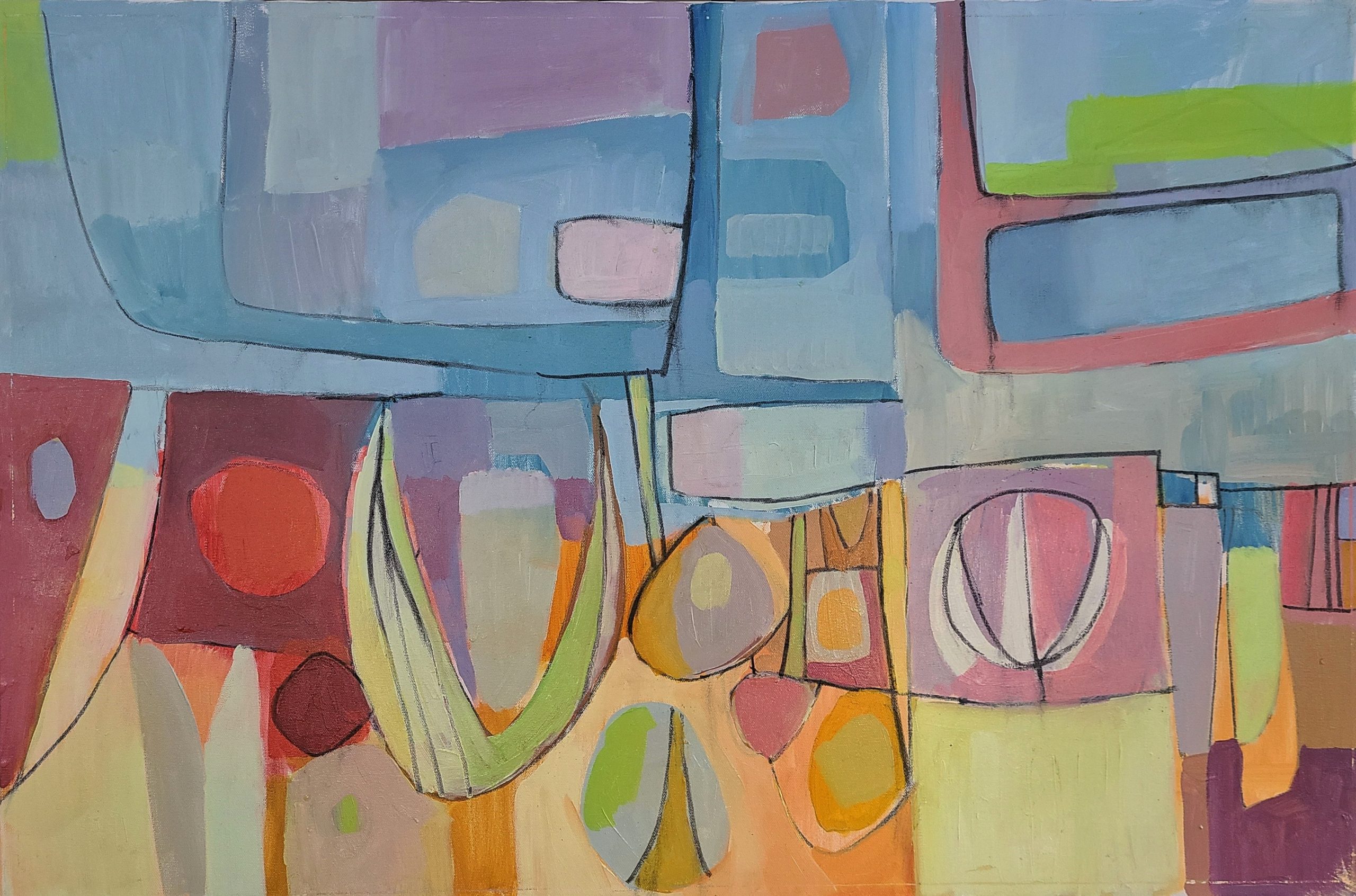 A WALK THROUGH THE GALLERY

Exhibit curator, Sigrid Trumpy, met with fellow artists Neil Harpe and Cassandra Kabler to explore this show together. We hope you’ll enjoy their walk through the gallery.

“There is more space to breathe in this painting than in some of the others, such as Dark Waterfall 2018. The fruit could almost be musical notes.” -Cassandra Kabler

ANOTHER FRAME OF REFERENCE

Each of us brings our own perspective as we engage with the works in this show. Included here are additional references we hope enrich and expand your experience.

Excerpt from Wassily Kandinksy’s ‘Concerning the Spiritual In Art’

VI. THE LANGUAGE OF FORM AND COLOUR - click to read

The man that hath no music in himself, Nor is not mov’d with concord of sweet sounds, Is fit for treasons, stratagems, and spoils; The motions of his spirit are dull as night, And his affections dark as Erebus: Let no such man be trusted. Mark the music. (The Merchant of Venice, Act v, Scene I.)

Musical sound acts directly on the soul and finds an echo there because, though to varying extents, music is innate in man. (Cf. E. Jacques-Dalcroze in The Eurhythmics of Jacques-Dalcroze. London, Constable.—M.T.H.S.)

“Everyone knows that yellow, orange, and red suggest ideas of joy and plenty” (Delacroix).

These two quotations show the deep relationship between the arts, and especially between music and painting. Goethe said that painting must count this relationship her main foundation, and by this prophetic remark he seems to foretell the position in which painting is today. She stands, in fact, at the first stage of the road by which she will, according to her own possibilities, make art an abstraction of thought and arrive finally at purely artistic composition.

Painting has two weapons at her disposal:

Form can stand alone as representing an object (either real or otherwise) or as a purely abstract limit to a space or a surface.

Colour cannot stand alone; it cannot dispense with boundaries of some kind. A never-ending extent of red can only be seen in the mind; when the word red is heard, the colour is evoked without definite boundaries. If such are necessary they have deliberately to be imagined. But such red, as is seen by the mind and not by the eye, exercises at once a definite and an indefinite impression on the soul, and produces spiritual harmony. I say “indefinite,” because in itself it has no suggestion of warmth or cold, such attributes having to be imagined for it afterwards, as modifications of the original “redness.” I say “definite,” because the spiritual harmony exists without any need for such subsequent attributes of warmth or cold. An analogous case is the sound of a trumpet which one hears when the word “trumpet” is pronounced. This sound is audible to the soul, without the distinctive character of a trumpet heard in the open air or in a room, played alone or with other instruments, in the hands of a postilion, a huntsman, a soldier, or a professional musician.

But when red is presented in a material form (as in painting) it must possess (1) some definite shade of the many shades of red that exist and (2) a limited surface, divided off from the other colours, which are undoubtedly there. The first of these conditions (the subjective) is affected by the second (the objective), for the neighbouring colours affect the shade of red.

This essential connection between colour and form brings us to the question of the influences of form on colour. Form alone, even though totally abstract and geometrical, has a power of inner suggestion. A triangle (without the accessory consideration of its being acute-or obtuse-angled or equilateral) has a spiritual value of its own. In connection with other forms, this value may be somewhat modified, but remains in quality the same. The case is similar with a circle, a square, or any conceivable geometrical figure. [N.B. The angle at which the triangle stands, and whether it is stationary or moving, are of importance to its spiritual value. This fact is specially worthy of the painter’s consideration.] As above, with the red, we have here a subjective substance in an objective shell.